I wanted to post about this hike because I really enjoyed it and found it to be scenic as shit. We actually hiked this bad boy in September of 2012 so I'm a little late to the game, but here it is. Max and I drove to McKenzie Pass and camped the first night at Scott Lake. We got there towards dusk, set up camp, started a fire, drank a beer and made dinner. Click on the pictures to see the entire scene if so desired! 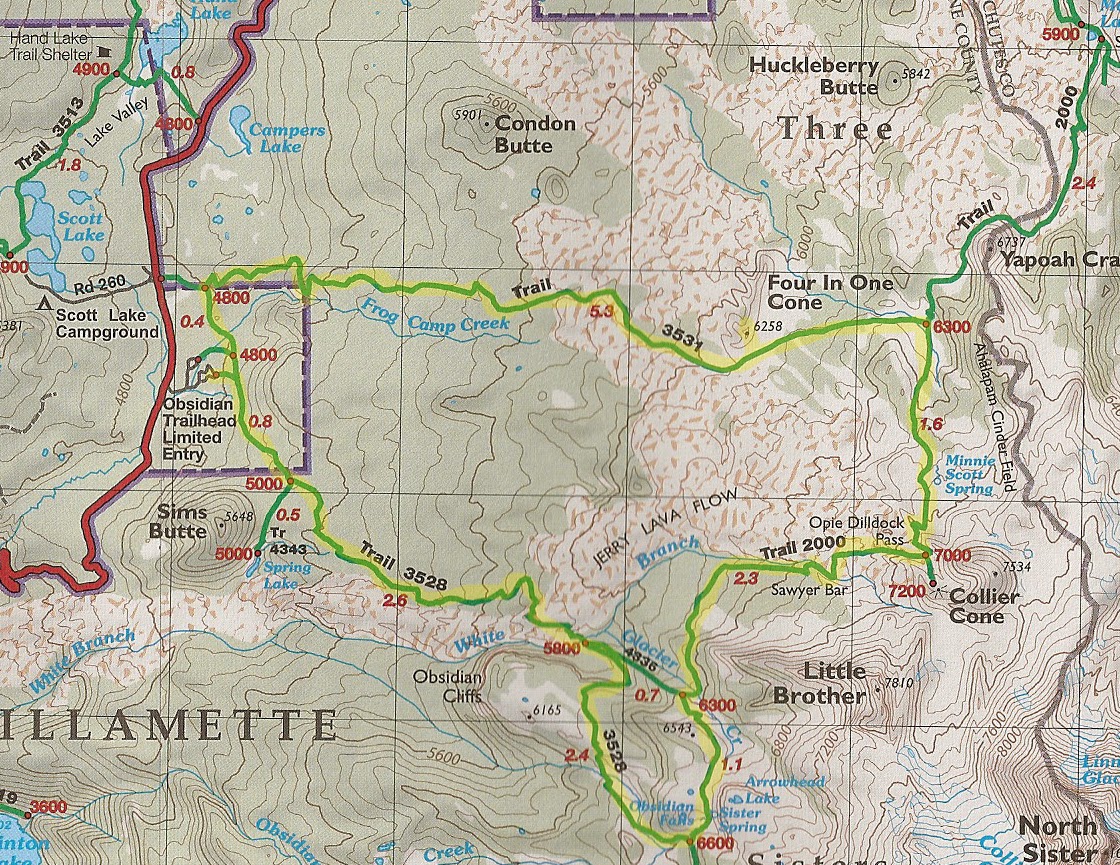 Here's the route we took. The only spur we did was to Four in One Cone and some cross country bushwhacking  to our secret fucking awesome epic campsite, Easton Butte. My friend John told me about the campsite and showed me where it is on the map. I'm sorry, but I feel it is my duty to keep the site a secret as it is so awesome I fear that it would be over run with cigarette butt droppers and bullet casings if I announce its location on the internet. It is great though with dramatic views of several peaks. We had ideal weather for this journey! 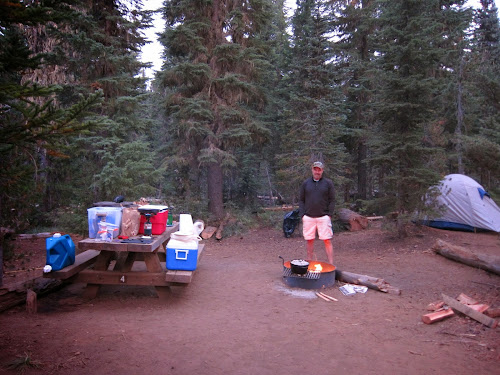 Look at the insane amount of shit we have on that picnic table! I wanted to make a dutch oven pizza so we had to load up appropriately. 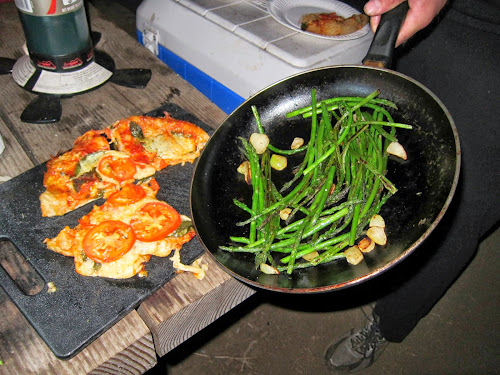 Someone call the flavor police because we have a taste emergency! Wee oooo weee oooo! 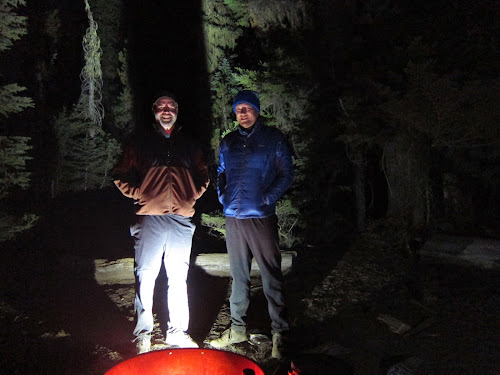 Sasquatch stole our pants so we were forced to wear our sweat pants by the fire (picture by Sasquatch). Scott Lake was great but it was a bit dusty this late in the year. Who gives a shit- we're in the woods motherfuckers! 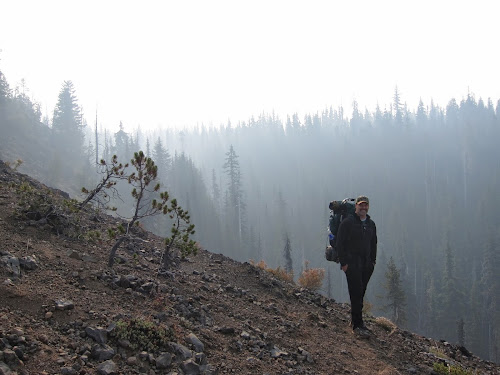 About half of the first day's hike was through some fairly dense smoke created by the epic Pole Creek Fire (not my pic). We weren't even sure we would be able to do the hike as we saw Forest Service trucks blocking off a lot of the side roads off of Highway 242 closer to Sisters. We talked to one of the Forest Service folks and they told us we would be fine at Obsidian. We were definitely out of harm's way but not out of the smoke! 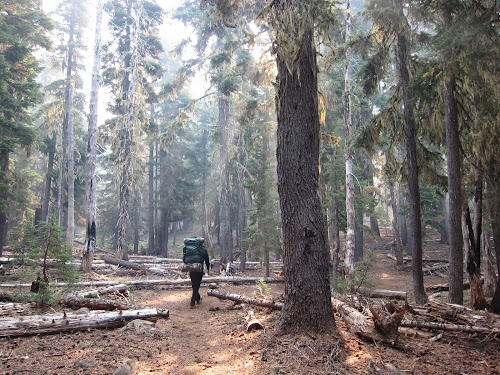 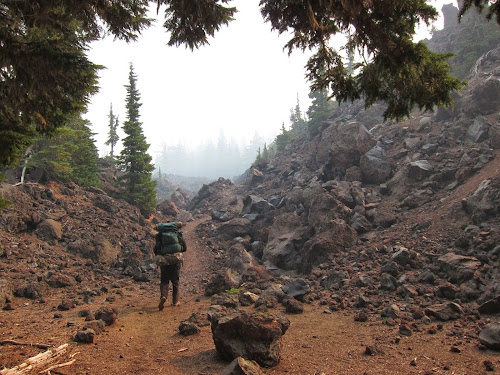 Leaving the forest for our first patch of the lava fields. So bad ass! 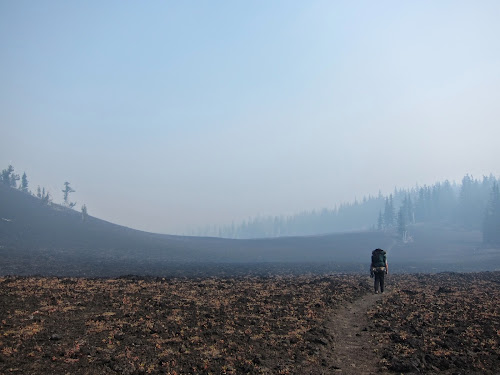 Hack, cough. Taking the junction to Four in One Cone. We walked through a really cool limited vegetation 'meadow,' hid our packs and headed to the summit. Here's Max kicking ass in the moonscape. 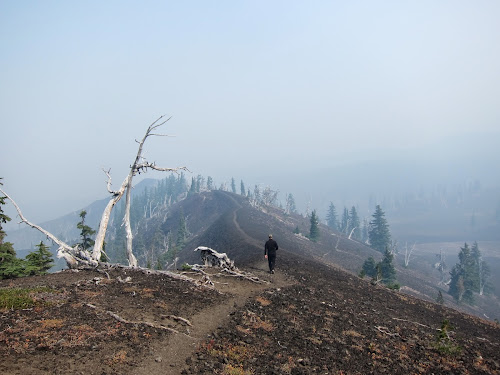 On the ridge line for Four in One Cone. It was super bad ass but must really be something with a view! There are some really neat ancient looking dead trees up here. 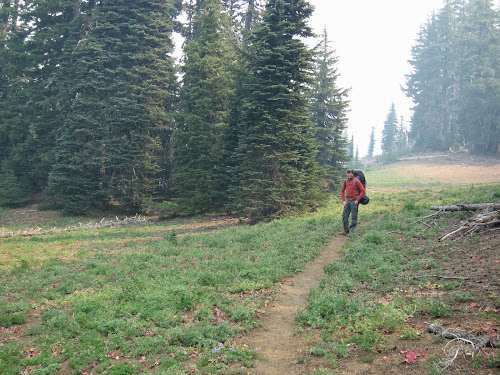 There's a sweaty stud on the trail sweating his ass off. What a hero stud. 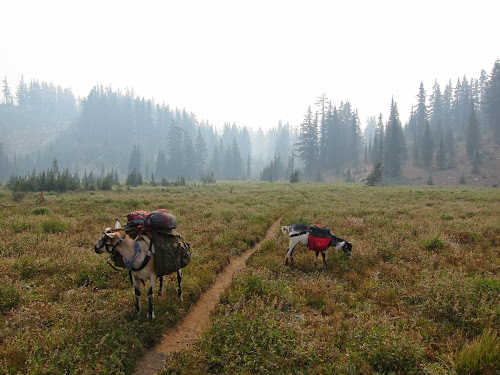 Scott Trail met the PCT in a huge cool meadow. We turned right on the PCT and ran into these two goats. They told us they had been hiking for several days but were on their way out as they had tired of the smoke. In fact we passed several groups of people who were hiking out due to the smoke. 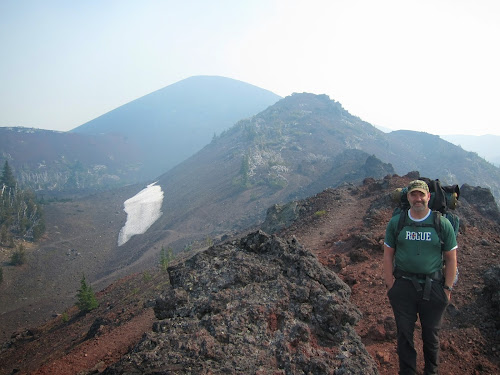 In the Opie Dilldock Pass area with Collier Cone through the smog in the background. That shirt is making me thirsty. 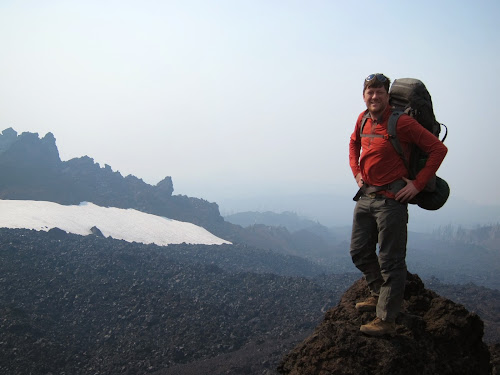 Despite the limited visibility it is very pretty! The background is nice too! 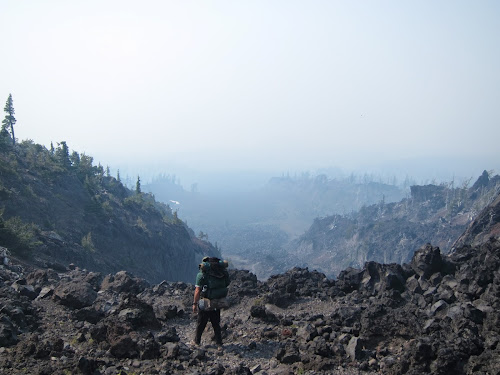 Heading down the switchbacks from the pass through a super bad ass lava canyon. If you bring your dog make sure to bring booties as these rocks are rough and sharp. 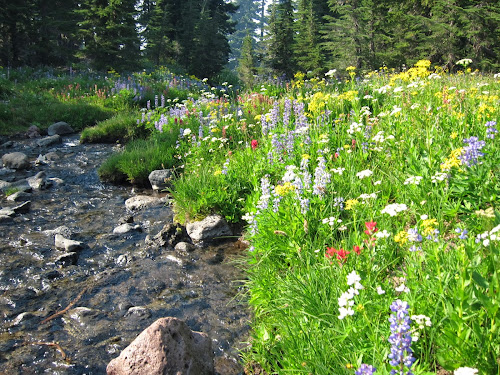 We finally made our way out of the smoke to a beautiful wildflower-strewn creek-gurgling spot called Sunshine Meadow. Just fucking gorgeous! 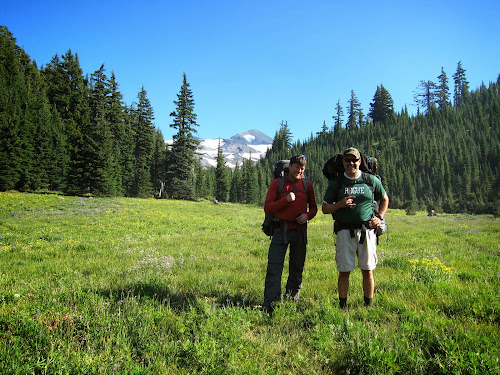 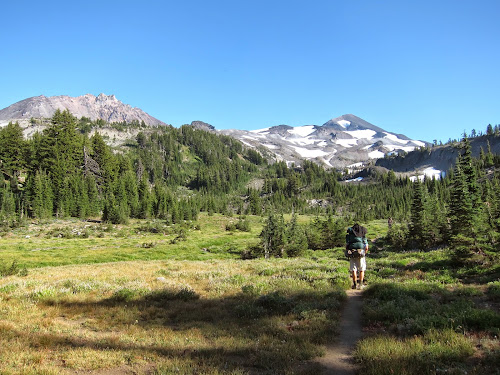 Oh nothing. Middle Sister in the background. 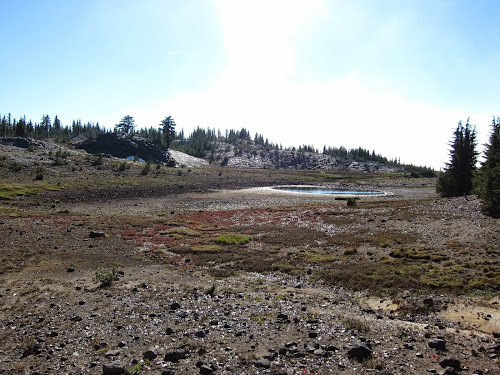 It's hard to see here but after we passed through Sunshine we crossed an area that was full of obsidian chunks everywhere. Those sparkling rocks in the foreground are pieces of the lava glass. Super bad ass but don't fall down! 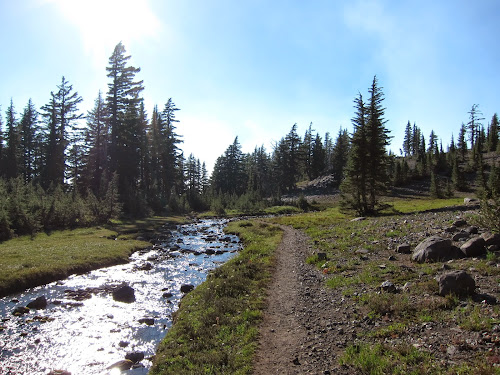 Not sure of the name of this creek but it will lead us to the glory that is Obsidian Falls! Some really neat wide open spaces at this part of the trail. 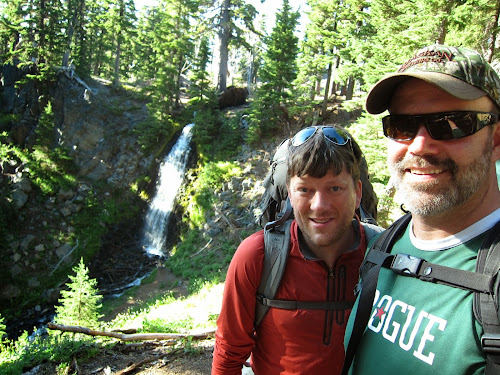 Shit yeah! It's hard to tell from this pic but the talls are probably around 30 feet tall. We went down there and cooled off and picked up 10 pound pieces of obsidian and wondered about them. 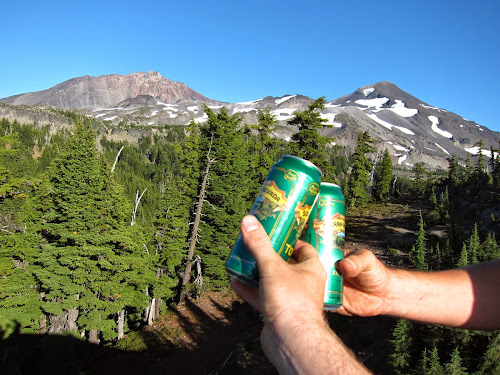 We made it to our secret campsite! From where we camped we could see several mountains and would have seen more except for the smoke to the east. I packed a 6 pack of Sierra Nevada IPA pounders in a small cooler full of ice wrapped in garbage bags in my backpack all the way to our camp spot. Unfortunately, I think due to the smoke, I wasn't feeling super hot when we finally got there so I only drank one beer. Max took care of three of them though so it was worth the extra weight. Cheers! 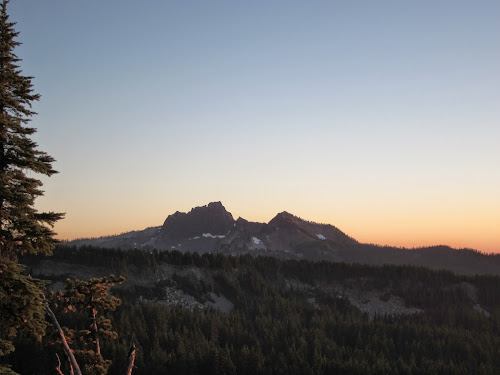 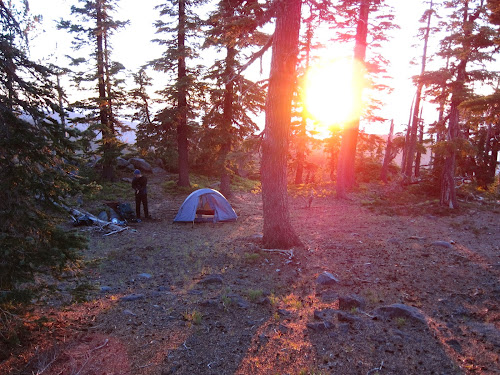 Our insane fucking bad ass ruling campsite on Easton Butte. Its location will remain a secret so littering dumb asses don't ruin it. Not that there are probably going to be too many littering tree chopping dip shits this far from a paved road. 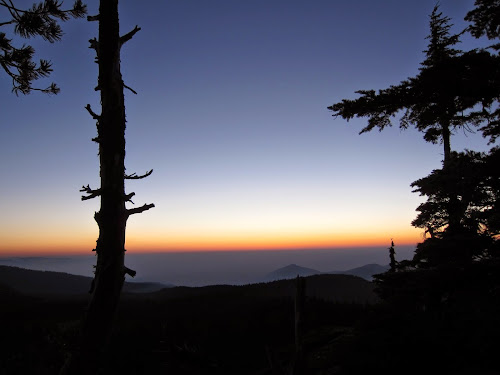 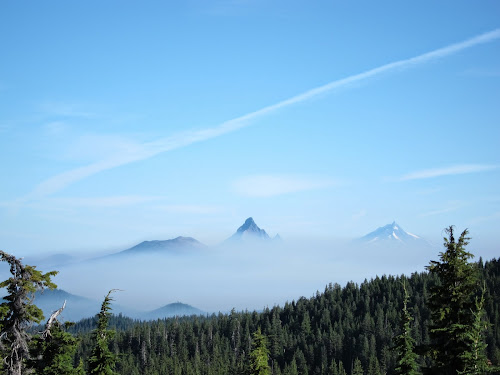 Good morning! Smoke still heavy in the valley. Luckily we didn't have to pass through it anymore until the very end of our hike back at the car. This was a beautiful hike that pretty much has it all: mountain views, streams, meadows, waterfalls, springs, lava flows, tree islands, obsidian. What else could you want? Highly recommended! Here is another great description of the hike. Google will take you to many more as well. Get off your ass and do it! And don't forget to get your wilderness pass first though.
Posted by The Power of Crystals at 11:45 AM